In 1912, American society practiced strict racial segregation. Blacks or “coloreds” as they were then known were second class citizens by law. In 1896 the Supreme Court (Plessy v. Ferguson) permitted enforcement of segregation wherever races comingled. Indeed, 30 of the 48 states enforced laws banning interracial marriage.

Against this backdrop ‘Abdu’l-Bahá arrived in April 1912, ready to dramatically demonstrate by word and deed the Bahá’í teaching of the ‘Oneness of Mankind’.

Louis George Gregory (1874-1951) was an African-American attorney born just after the emancipation of slaves. He earned a law degree from Howard University and was admitted to the bar in Washington D.C. in 1902. He became a Bahá’í in 1909 and was distinguished by being the first African-American to be invited by ‘Abdu’l-Bahá to the Holy Land for Bahá’í pilgrimage.

On April 23, 1912, through arrangements made by Louis Gregory, ‘Abdu’l-Bahá spoke at Howard University, a historically black college. ‘Abdu’l-Bahá began his address:

"Today I am most happy, for I see here a gathering of the servants of God. I see white and black sitting together. There are no whites and blacks before God. All colors are one, and that is the color of servitude to God … the heart is important. If the heart is pure, white or black or any color makes no difference. God does not look at colors; He looks at the hearts. He whose heart is pure is better. He whose character is better is more pleasing."

Following the talk, ‘Abdu’l-Bahá was the guest of honor at a reception hosted by the charge d’affaires of the Persian Legation. Prior to the the luncheon Louis Gregory had been summoned to the reception by the Master. Some of the guests present were very prominent in the social life of the Capital—all were white. Before the luncheon could begin ‘Abdu’l-Bahá stood up, looked all around the room, and asked, “Where is Mr. Gregory? Bring Mr. Gregory!” The host scrambled to find Louis Gregory. At ‘Abdu’l-Bahá’s request, a place setting had been made on his right, so when Mr. Gregory was brought forward and seated, he became the de facto guest of honor!

This was accomplished easily by ‘Abdu’l-Bahá. “He stated He was very pleased to have Mr. Gregory there, and then, in the most natural way as if nothing unusual had happened, proceeded to give a talk on the oneness of mankind.”

Louis Gregory and a white English Bahá’í, Louisa (Louise) A. M. Mathew were married through the encouragement of ‘Abdu’l-Bahá on September 27, 1912 in New York City.

Louis Gregory devoted the remainder of his life to the cause of racial amity and his promotion of the Bahá’í teachings. He is buried with his devoted wife Louisa near the Green Acre Bahá’í School in Eliot, Maine.

DC observes the Bicentenary of the Birth of The Báb 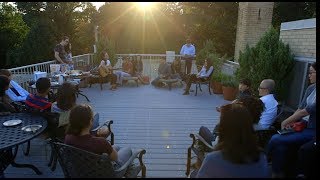 Join us this Sunday for the Bicentenary Celebration